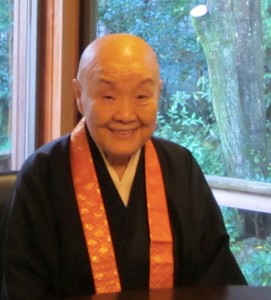 A few weeks ago, Japan’s best-known Buddhist nun and activist Setouchi Jakucho was kind enough to give me an interview about her little-known period in psychoanalysis with Heisaku Kosawa, in the mid-1960s. (For Japanese readers, she discusses it briefly in 五十からでも遅くない ).

Setouchi credits Kosawa with a radical shift in the way she understood herself and the world, contributing – though she had no interest in Buddhism at the time she was seeing Kosawa – to her taking of religious vows years later.

Aeon Magazine have just published a short article based on that interview here.

My BBC Free Thinking talk – ‘Therapy vs Prayer’ – will be broadcast on Radio 3 on Friday 8th November, as ‘The Essay’. For those of you with something else to do on a Friday Read more…

Asian Society for the History of Medicine: ‘Doing Psychoanalysis in the Spirit of Shinran’

A few weeks ago I presented a short paper at a conference organised by the Asian Society for the History of Medicine, entitled ‘Doing Psychoanalysis in the Spirit of Shinran: The Relationship Between Theory and Read more…

A natural element of my current Japanese psychoanalysis project is the question of transcultural or cross-cultural psychiatry – the variations in how mental health and illness is experienced, discussed, and treated across cultures. A small-scale Read more…